Written by Britain Southwick
Updated over a week ago

The reward validation callback feature is used to determine whether or not Friendbuy should fulfill the reward for a conversion based on logic in your own system, such as returns or cancellations. This is meant to provide flexibility on top of the fraud checks and reward criteria that Friendbuy provides.

Note, it is best used with a reward days to delay, set in Reward Configuration, which is a delay to postpone the processing of a reward until a specified amount of time has passed.

Acme has a widget and has set up a reward validation callback and a reward delay of 10 days. Alice shares with Bob through the widget on Acme's website. Bob clicks on the link and makes a purchase from Acme, which generates a conversion and a reward. Since Acme has a reward delay of 10 days, the reward will not be processed until the 10th day. Bob cancels his order 4 days after making the purchase which lead to the conversion. On the 10th day, while processing the reward, Friendbuy fires the reward validation callback. Acme's system receives the request and responds indicating that the reward should not be fulfilled.

The request body will include details about the purchase that generated the conversion, such as referrer, purchase date, order id, and more. The full data included is described in our REST API documentation under the conversions and conversion detail sections. 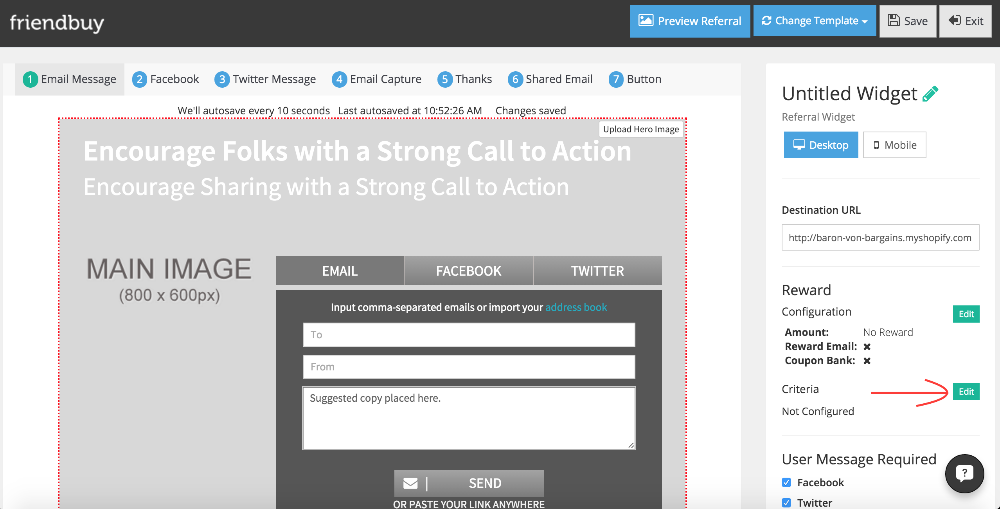 7. Enter the URL for the route you have set up to process the reward validation callback and hit save.

The POST requests made to the Validation Callback URL include a signature header, X-FRIENDBUY-SIGNATURE-V2, that you can use to verify that the request has come from Friendbuy.  Note, any other header signatures included in the request should be ignored.

You can follow these steps to verify the request:

* Your API secret may be found under "Settings -> Configurations -> API Access"

Here is an example of the signature creation algorithm implemented in Python:

If you'd like to restrict access only to the servers Friendbuy sends these requests from, you can whitelist the following IP addresses:

Did this answer your question?